How to learn ​​vocabulary

If memorising lists of words would be sufficient to build a vocabulary, I would be fluent in Russian now. (That’s what we did under the bad old Communist regime: memorised a page or two worth of vocabulary every week, took a vocabulary test, and then forgot it all).
Learning vocabulary is not like memorising facts. When was the Battle of Waterloo? You may think for a second, and then say: 1815. In order to effectively use your vocabulary, the words must come instantaneously and effortlessly. Therefore, we can liken it to practising a sport: for it to be effective, a movement has to go into muscle memory, your vocabulary has to be built into instantly firing neural connections.

In order to build vocabulary which we can actually use, we must turn on a child’s natural “language learning machine.” For that, we use the following methods cumulatively:
​World memory champion Dominic O’Brien uses the same technique, and brings the following examples: 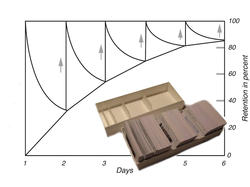 ​Studies have shown that in order to really own a word, and be able to use it automatically in conversation, it has to be revised at least a hundred times. In a natural language environment this comes naturally: you do see at least 100 dogs during a childhood and even the word dinosaur will come up repeatedly hundreds, if not thousand times ... on TV, in the museum, geography class, the movies and in conversation. However, if you are learning a language away from the country where it is spoken, you have to artificially create those 100 repetitions. One way to do so is to create a treasure box for your vocabulary, in which you are collecting every word you ever learned on small cue cards. (The German word for vocabulary is Wortschatz, which means word-treasure, signifying that you own a treasure when you collect enough words to speak with.) In HypnoGerman we use a spaced repetition system, which ensures that words are repeated at optimal intervals, just before they would be forgotten... they come up again on your cue cards, in context, in conversation and in new situations.

Using all the methods outlined above in a combined fashion is the second best way to acquire vocabulary. The best way is to use a sleeping dictionary. I’m afraid I can’t help you with that, but I can teach you the basics, and you might find your luck later travelling to a native country...
Back